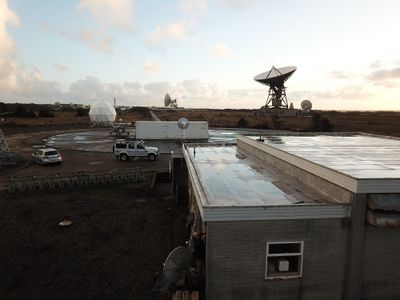 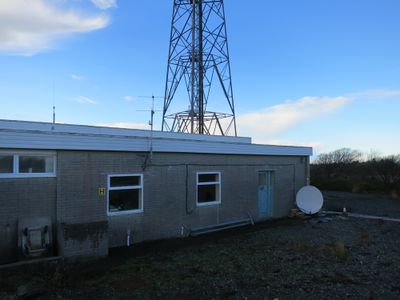 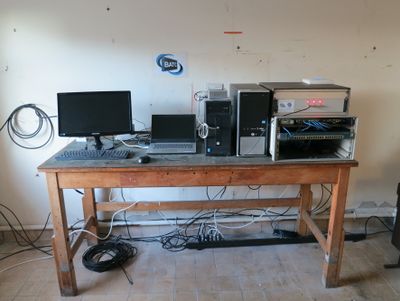 The equipment is housed in a room dedicated to amateur radio infrastructure in the original control building for the now defunct GHY2 90 ft dish antennae, built in 1969.

As well as the Es'hail-2 (now known as Qatar Oscar 100) WebSDR and spectrum monitor, the station houses an AMSAT-UK Funcube ground station and an HF Kiwi WebSDR with GPS TDOA.

The original dish installed in August 2018 was a consumer model and suffered damage in strong winds during October 2018.

This was replaced in January 2019 with a heavy duty Hirschmann 1.3m offset dish. 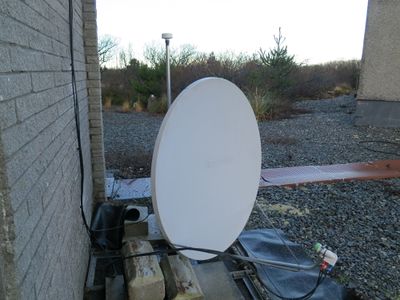 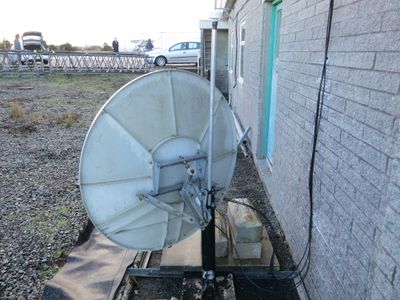 A modified Octagon quad LNB is mounted on the dish and locked to the 25 MHz output from a Leo Bodnar GPSDO.

See https://wiki.batc.org.uk/Es%27hail-2_LNBs_and_Antennaes for more details on the locking modifications

The 25 MHz reference is fed to the LNB through a dedicated coax run, and 2 further coax runs are used to feed separate horizontal & vertical feeds back to the equipment room.

2 separate AirSpy USB SDR Receivers, locked to a 10MHz output from the LeoBodnar GPSDO, are used for the WebSDR and Spectrum monitor. 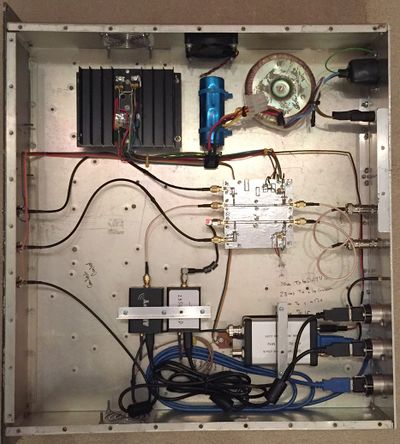 The GPS reference is a Leo Bodnar unit, running firmware version 1.12, programmed to produced 10 MHz (for the Airspys) and 25 MHz for the LNB. The settings for the reference to produce these 2 frequencies were not straightforward (as the 2 outputs on the Leo Bodnar unit need to be linked) but are here for reference:

The WebSDR & Spectrum Monitor both run off a single machine with the following hardware specification:

Goonhilly Earth Station has 2x diverse redundant 10Gb links into JANET PoPs. They have been kind enough to give us a dedicated IP address and access to >300Mb/s of up & down bandwidth for use by the station.

A pfsense firewall running on a PC Engines APU2D4 board is used as the station router & firewall.