The Portsdown XY Display is intended to be used with a Spectrum Analyser such as an HP141T as a secondary display which allows high persisance, screen capture and normailisation. It uses an interface that is connected to the “Vertical Output” and “Scan In/Out” BNCs on the front of the HP141T and then feed the digital signals to the Raspberry Pi 4 in the Portsdown 4. 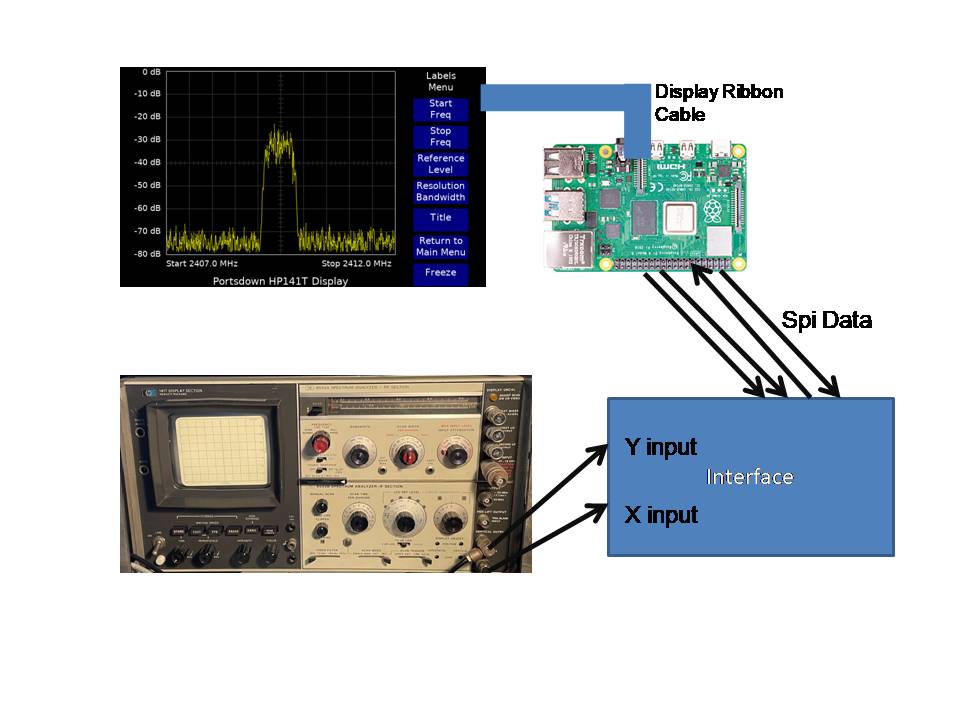 The software monitors the Scan Output waiting for it to go to the left of the screen and then samples the Vertical Output 500 times as the Scan Output increases. These samples are displayed on the screen almost immediately, erasing the samples from the previous sweep as the update moves from left to right. A typical displayed image can be seen below. 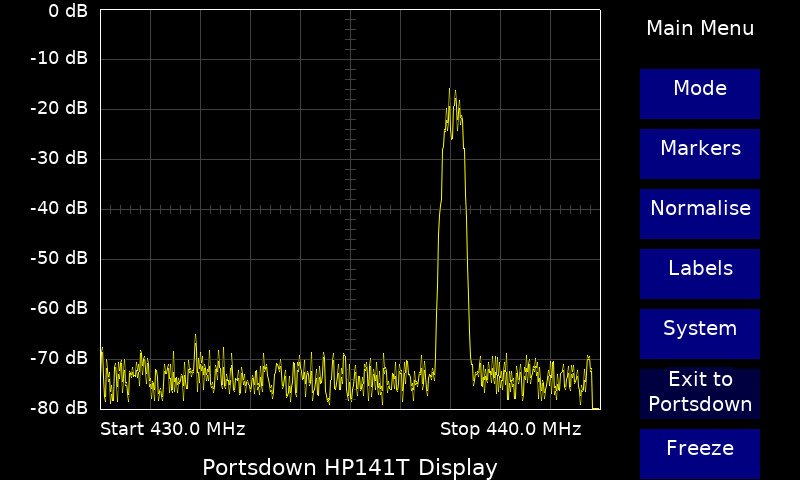 The start and stop frequencies are manually entered, as is the Plot Title. Reference level and resolution bandwidth can also be manually entered and displayed if desired. The displayed images can be captured and stored on the SD Card in the Raspberry Pi for export to a PC.

If using a sweep generator with the Spectrum Analyser, there is the facility to normalise the display. This involves taking a sweep without the device under test in circuit, measuring the system response, and then connecting the test device and simply displaying the difference. This can cancel out the effect of dips and peaks in the response of the test system.

The interface circuit used is very simple with an Op-amp for level and gain shifting, and a 10-bit 2-channel analogue-to-digital (A-D) converter.

The input dual op-amp must be capable of rail-to-rail operation if a single 5v supply is to be used. The LM358 is suitable. Connection leads to the Raspberry Pi should be short (less than 20 cm) as the spi protocol used for the digital data transmission is only designed for on-PCB use.

Some tweaking of R1 and R2 may be required to ensure that the sweep voltage falls below 150 mV (on the input to the A-D Converter) at the start of the sweep. This is what triggers the start of the data capture. The ramp needs to reach about 3.5v to complete the sweep. The resistors R4 and R6 set the Y gain, and hence the Y calibration. In my prototype R6 was a 10K in parallel with a 100K.

The speed of the A-D converter limits the scan speed to about 2 ms per division for correct operation. However, at slower scan speeds, the display offers almost infinite persistence with clean overwrite on subsequent scans.