In 2014/5 the UK 9cm amateur band was reduced to 3400-3410 MHz (from 3475 MHz), along with restrictions in 13cm. Consequently it only has the room to run DATV. However these spectrum changes have prompted development work and the band has proofed useful for UK repeater outputs.

Reports from the repeaters on 3.4 GHz suggests it is very low noise spectrum and actually performs as well if not better than 2.3 GHz.

There is (or was) a lot of surplus transmit (and receive) equipment on the surplus market, mainly from the failed Ionica broadband wireless system, and it is a very easy band to get on to, both for Tx and Rx.

It is very easy to receive 3.4 GHz DATV on using C band satellite LNBs feeding directly in to a free to air satellite receiver or MiniTiouner - no big antennaes, pre-amps or filters needed. 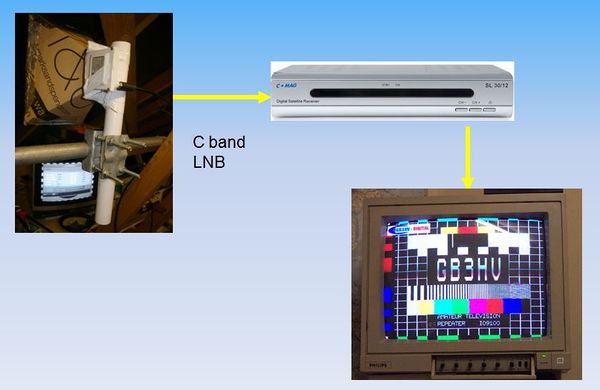 A lot of people use the Titanium PLL LNB available from ebay. 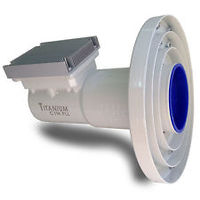 You can either use the LNB on it's own, build a simple horn from a Marks and Spencer cardboard box covered in tinfoil, shown above, or mount it on a Sky mini dish, shown below, to give more gain. 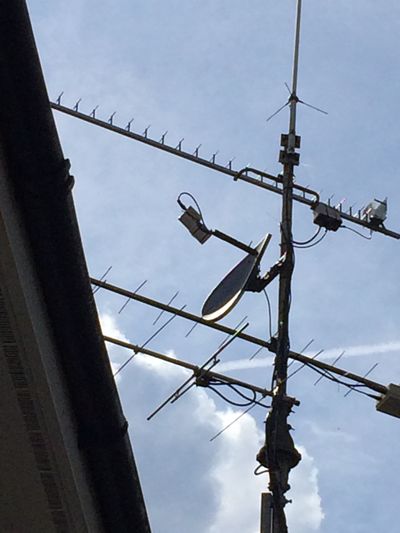 It is suggested that rather than try to generate DATV directly on 3.4 GHz, it is easier and probably more efficient to generate the DATV signal using the Portsdown at a lower frequency and then converting up using a Narrow Band transverter. This can either be a commercial unit or home built using modules described below.

A few years ago there was a lot of surplus 3.4 GHz wireless broadband equipment available - you don't see some much now, but if available it can be easily converted to DATV operation. 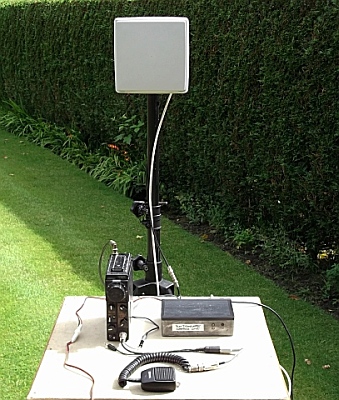 The Airspan AS4000 is an outdoor consumer unit operating in duplex mode (Tx and Rx) on 3.4 GHz - it needs DC supply, transmit IF and reference oscillator up the co-ax and sends rx IF down.

The unit IF is at 820 MHz and G6GVI and M0DTS have both modified the local oscillator by changing the reference oscillator and reprogramming the PIC to provide an IF at 1296 - power output is 100 - 200 miliwatts with no modifications.

However, it is now possible to just use the ADF4351 controlled by Ron G7DOE's simple controller to provide an LO of 2970, which provides an IF at 432 MHz for Narrow Band and DATV use. The only other mods are to apply the IF signal after the 800 MHz IF filter and key the transmitter as shown on M0DTS site. 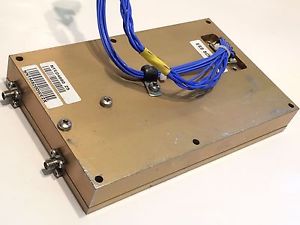 Link to GM4ISM page show how to use the Ionica PA 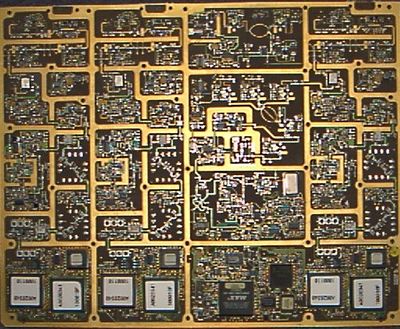 Whole chunks of working circuits can be retrieved from the Ionica main board to make a simple transverter as described on John G4BAO's site - don't forget, it is much easier now as we can use the ADF 4351 as the Local Oscillator on any frequency you desire.