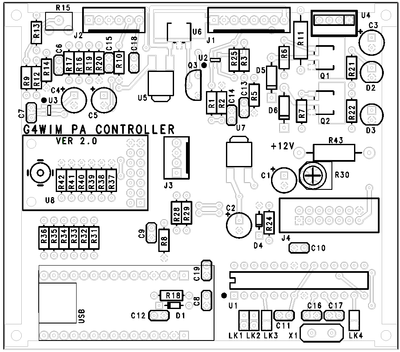 The controller logic is driven by a standalone ATmega328P, whereas the the radio link uses an nRF905 + Arduino Nano v3 (which has its own ATmega328P). The Arduino Nano code is based on this solution http://blog.zakkemble.net/nrf905-avrarduino-librarydriver/comment-page-1/

IMPORTANT - after building several of these links it became apparent that the timings required for the nRF905 are not the same for all modules. To fix this issue I've created a new improved version of Zak's C code for the Nano. The code for the standalone ATmega328P has also been changed to match. Using Zak Kemble's code in the Arduino environment might work - but it is better to use his C code version with my modifications as documented and provided in the above source code link.

When programming the hex files make sure the "divide clock frequency by 8" fuse is unchecked and that the fuses specifying the clock source select an external 8-16 MHz crystal. All these fuses should already be set correctly on the Nano because it comes with its own 16-MHz crystal but will likely have to be adjusted on the standalone ATmega328P (the factory settings are different). When in doubt consult an AVR fuse calculator such as this one: https://www.engbedded.com/fusecalc/

If building your own code from source using Atmel Studio V7.0 set optimisation to -OS (optimise for size).

Any chips supplied by the BATC shop will have the correct code installed for both the ATmega and the Nano - you cannot mix and match Arduino code with the ATmega C code.