The MGF 4919 FET device is quoted as 12dB gain at 0.5dB noise figure at 12GHz, which is good in its own right, there are no figures for lower frequencies but the gain will be higher and the noise figure lower.

The source has 4 off 1nf chip capacitors to ground and an 8.2ohm resistor also to ground. Without those and the source grounded the FET needs a negative bias supply on the gate.

The gate pinch-off is about -0.15volts but there is a production spread to a max of -1.5 volts, you could replace the 8.2ohm resistor with a multi-turn 100ohm pot to get it to exactly 2volts across drain to source, although my 23cm version has a negative bias of -0.15volts which is the basis of calculating the 8.2ohm source resistor, the source current will make the input gate at -0.15 volts relative to the source.

The drain feed is thin line on the PCB if you are cutting the PCB by hand with a stanley knife I suggest you just extend the resistor leg with some tinned copper wire instead of making a thin track.

Construction notes for a hand carved PCB: If you make two cuts with a stanley knife on the PCB, heat up the part you want to remove between the two cuts with the soldering iron (add some solder to conduct the heat) and you will find the copper lifts easily with the knife as the heat softens the glue sticking the copper down. Keep the heat going and move the iron along as you remove all the strip you don’t want. Once you have lifted the start with the knife you can switch to pull the copper up with metal tweezers or small long pointy nose pliers. 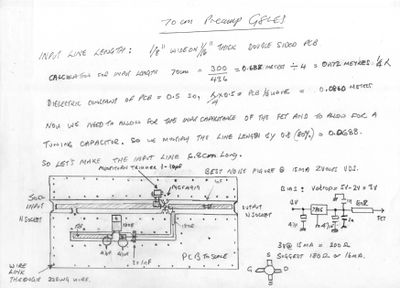