For those of you who want to drive Microwave transverters from your Portsdown or need a higher drive level, the team have developed an 8-Band RF output switch that includes an RF amplifier.

It is capable of amplifying the variable level from the Filter Modulator board / Lime SDR up to 10 dBm and switching it to separate external amplifiers for the 70, 144, 437, 1255 bands and up to 4 transverters for the higher bands. One of the 4 transverter output can also be used for 2300 / 2400 MHz - see mods below to maintain output level.

The module should be used with the 8 band decoder which will provide PTT steering for the 8 bands - see this page for more details.

PCBs and the control PIC are available from the BATC Shop.

We have seen a number of failures caused by the use of the 8 way switches with the LimeSDR (the PCB was originally designed for use with the Filter-Modulator Board). The problem with the LimeSDR is that it can easily deliver +17 dBm during its calibration pulse, thus feeding +22 dBm into the RF switch, which exceeds its absolute maximum rating at 146 and 437 MHz.

The version PCB provides a solution by increasing the attenuation on the input to the 8-way RF switch, or to use a lower gain RF amplifier. The revised layout is as show: 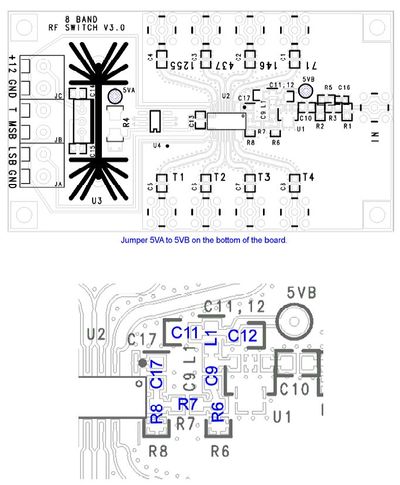 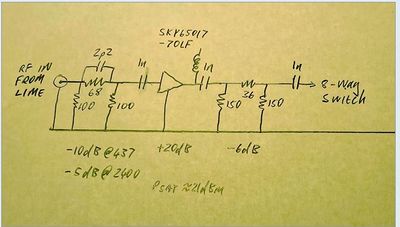 The latest parts list is here File:8_BAND_RF_SWITCH_V2.2a_PARTS.xls. This list is corrected to increase the value of C13 to 2.2 uf to prevent the 5v regulator oscillating.

The grounded ends of R1 and R2 on the input attenuator need properly connecting to ground. Thanks to Colin G4EML for spotting this and pointing out that this can be corrected by scraping away some of the solder resist next to the pads and adding a blob of solder to connect the resistors to ground as shown in his picture here: 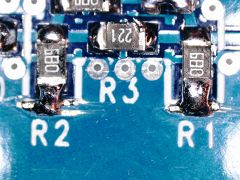 When used with the Lime SDR, Dave G8GKQ recommended changes to the input attenutor in his article in CQ-TV 262 to improve performance at 2.4GHz. C16 changes to 1pF and R5 becomes a Zero Ohms link. The modification is shown here on a prototype PCB with the 1pf capacitor on the white square. 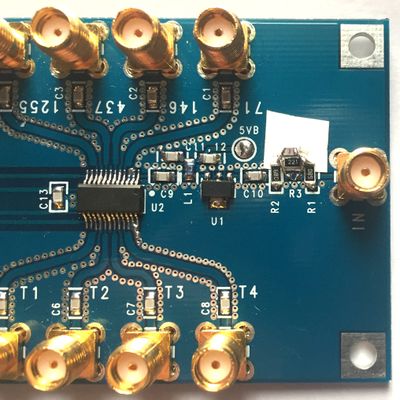 All the parts in the attenuator are 0603 sized; the V2.3 arrangement is in the revised parts list.

Here is a V2.3 PCB for LimeSDR Mini use, and the underside showing the wire link. Assembled by David M0YDH 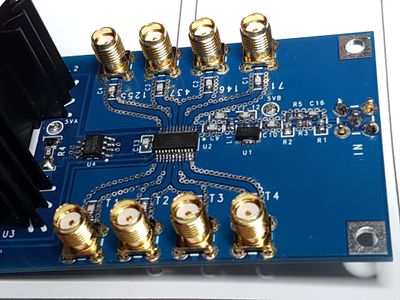 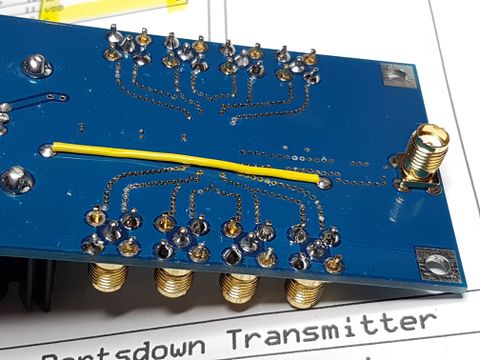 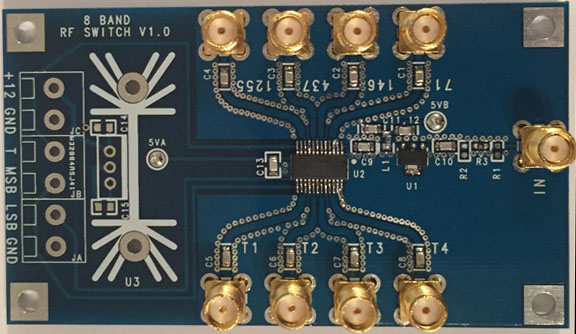 The initial design was as shown above - the first batch of boards will be supplied in this form. The initial (V1.0) circuit is here: Media:8 BAND RF SWITCH V1-0 SCH.pdf.

HOWEVER, the circuit needed some simple rework to provide a more stable power supply for the SKY MMIC and to equalise the levels across the bands. The modifications are to:

The modified board is shown below. 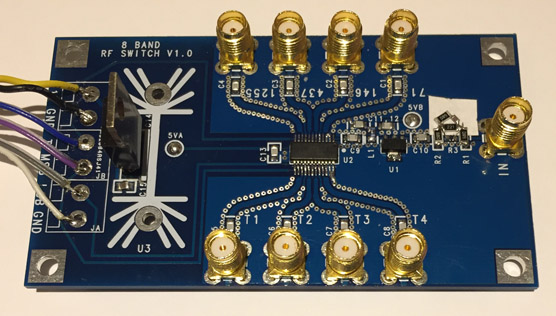