Software versions 201702100 and later include the additional capability to control a DATV-Express exciter board from a Portsdown transmitter system without the filter modulator card. If you have an earlier Portsdown software version, please update to the latest version to provide these capabilities. Here are the full details.

The Portsdown Software running on an RPi 3 will control a DATV-Express board directly via the USB port, without the need for any PC or other computer. The system gives a compact touchscreen interface to DATV Express and provides some of the features for DVB-S transmission that you would get using a Windows PC to control DATV Express. DVB-S2 and DVB-T are not available, although there is hope for DVB-S2 capability in the future.

A Block Diagram of a Typical Portsdown set-up for using the DATV-Express board for DVB-S modulator. The LCD Touchscreen is the normal GUI

For a usable Portsdown and DATV-Express transmitter, you will need a Raspberry Pi 3, a Waveshare touchscreen, a DATV Express board, suitable power supplies, and transmitter filters and linear amplifiers. Connect the DATV Express to the RPi 3 using a USB lead. Thanks to W6HHC for the diagram.

Using the touchscreen, the following capabilities can be controlled:

DVB-S MPEG-2 transmissions with sound using the Pi Camera and an external USB Microphone at Symbol Rates from 125 KS to 4 MS (but see limitations).

DVB-S H264 transmissions from composite video captured with a Fushicai EasyCap at Symbol Rates from 125 KS to 4 MS.

DVB-S MPEG-2 transmissions with sound from composite video captured with a Fushicai EasyCap at Symbol Rates from 125 KS to 4 MS.

IPTS Streaming input from vMix and an ffmpeg batch file for H264 and MPEG-2 transmissions.

All FEC modes are available, and using the Console any frequency can be selected.

The PTT switching is implemented similarly to the Windows version.

The settings for Ports A through D can be selected for each band in Advanced Settings, Option 5.

Further details of the DATV Express functionality and pin assignments can be found on page 65 of this User Guide: DATV-Express Users Guide for Windows-draft14

- The DATV Express board should connected to the RPi and powered on before the RPi is booted.

- The Portsdown capability of booting straight to transmit is not available with the DATV Express board.

- Please be do not rely on the PTT pin sequencing to protect your pre-amps and PAs. The software is just not robust enough for the Portsdown team to give any guarantees of its functionality. You have been warned!

- There is no means of putting a callsign caption on H264 transmissions.

- There is a delay of 5 seconds before the first transmission after switch-on. This delay is to allow the DATV Express firmware to be downloaded from the RPi.

- H264 transmissions from the Test Card or Contest Card only display the upper part of the picture at symbol rates over 250 KS. It is hoped to cure this within the next few releases.

- MPEG-2 transmissions from the Test Card or Contest Card at 4 MS occasionally break up. It is hoped to cure this within the next few releases.

DATV Express Server needs to be started at least 4 seconds or so before trying to send it any content, so it is started in the following places:

- On entering the Menu (console) system with DATV Express selected as an output mode.

- In a.sh if it is not detected as running.

In both cases the system sleeps for 5 seconds while the DATV Express server application starts up.

The express_server is controlled by sending commands to a file /tmp/expctrl. The transmission parameters and the start transmit, or start carrier messages are sent by a.sh. a.sh is called to transmit from both the console menu and the gui. Note that 5 band-dependent power levels can be pre-set in the Menu (Advanced Set-up).

The cease transmit or cease carrier commands are sent by the stop_transmit routines in either the menu.sh or in the gui.

Thanks to Charles G4GUO and Chris MW0LLK for their help in delivering this capability.

Port Switching From the Touchscreen

Ports A through D can now be set up to switch for each band from the touchscreen however, a number is requested. Here is the decode:

Portsdown software 201906060 (currently only a Dev release) introduces the facility to set the RPi GPIO Band Select and Transverter pins, independently of the transmitted frequency, by setting the ExpressPort to values between 16 and 31:

The DATVExpress user guide available here https://datv-express.com/uploads/UserGuide/DATV-Express%20Users%20Guide%20for%20Windows-draft14.pdf gives more details on the DATVExpress GPIO pinout including this table on page 65: 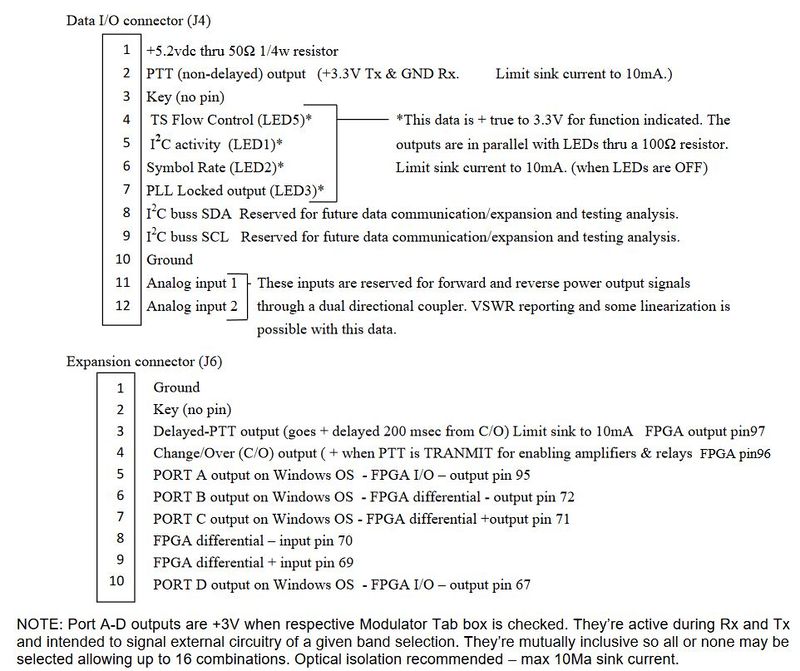