Note that GB3EY is switched off between midnight and midday every day to save electricity.

A new NoV was issued for GB3EY in August 2018 allowing the move to the East Yorkshire Repeater Group's site at Cave Wold Radio Station near South Cave in East Yorkshire. The QTH locator is IO93RS37ME. The new site is 155m ASL and the Alford Slot antenna is at 180m ASL with a good take off in most directions. The predicted coverage was created using Radiomobile and assumes 10m mast with a 15dBi antenna at the receiving end. This will be a substantial improvement over the old site on the North Sea coast at Aldbrough.

The repeater has returned using digital ATV to reduce the bandwidth occupied. The parameters are currently 1MS/s, FEC 3/4, with MPEG-2 encoding on 1308MHz. Test transmissions were run from a temporary mast and transmitter from August to October 2019 until the main tower was renovated and a single Alford Slot antenna was installed at 25m AGL fed with 33m of Andrews LDF5-50A. The Alford was made by G3GJA and uses a coaxial 4:1 balun formed from RG402 semi-rigid. This was found to be much easier to construct and test than the usual slotted sides coax balun approach. 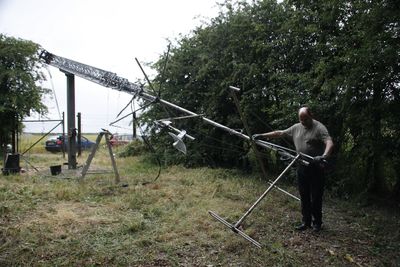 The logic is from the FM analogue repeater that has been renovated and updated by Bill G3RMX and Clive G3GJA, which takes incoming video from a BATC Ryde receiver and pre-amp. The DTX1 modulator only works with broadcast standard syncs but The BATC I2C based logic used on the analogue GB3EY does not use interlacing so a new SPG was built around the ZNA134 (CAT18 goody bag) and the I2C genlock chip was added and new syncs fed to it. The RGB feed from the I2C boards was then fed with the ZNA134 syncs to a new PAL encoder using the AD724. This gives a much improved, broadcast quality video output.

The transmitter, comprising of a BATC DTX1 and two modules funded by G4YTV, were made by Bert PE1RKI. They provide 13 watts of RF power output. A new duplex filter, a two pole transmit leg inter-digital filter and a five pole inter-digital filter were sourced from ID Electronik Gmbh in Germany. The filters allow GB3EY to use a single antenna without desense and at the same time apply in excess of 100dB of attenuation to the Claxby Radar on 1254.5MHz just 20.5MHz from the input frequency. The radar runs 400MWEIRP and is only 25 miles from the repeater.

A Portsdown streamer has been installed. Video and audio is sampled from the Tx feed and then sent to the BATC Streamer here: http://batc.org.uk/live/gb3ey. The Internet feed sent by a 6cm link over a 10km path was improved to get the speed up to 30Mbps downstream / upstream. 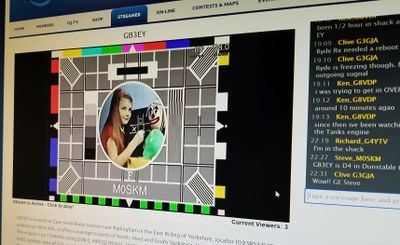 Fans have been added to the site hut, the SMPSUs and a larger fan fitted to the RF deck to improve cooling. A baffle has been fitted around the main PA fan intake to stop air being recirculated.

Because the repeater links parts of Yorkshire with ATV that can't be worked direct on 2m, a receiver on 144.75MHz that will be installed to feed the right channel with talkback audio on 23cms. In the longer term In the a dual band beam for 2m and 70cm will be installed with a Minitioune for inputs on those bands using 333kS/s or similar RBDATV signals.

We hope to resurrect GB3XY the 10GHz ATV repeater, that was operational from the same site, as a DATV repeater linked to GB3EY. However, designs for upconverters for 3cm are not readily available. 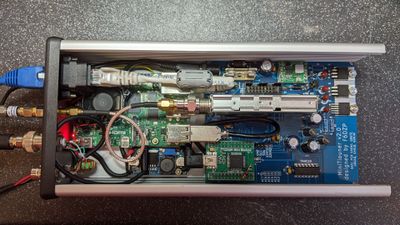