F5OEO had included F4DAV's innovative LeanDVB receiver software within the Transmitter software build, and from software release 201612310 this was included in the core functionality of the Portsdown transmitter. The software is described on page 18 of CQ-TV 252 and at http://www.pabr.org/radio/leandvb/leandvb.en.html.

To enable further investigation of the LeanDVB capabilities a new "LeanDVB DATV Receiver Menu" has been added in software build 201807090. This makes the receiver settings independent of the Transmitter settings, and allows adjustment of other parameters, such as sample rate and gain.

The LeanDVB receiver is not as good as MiniTioune (needing 6 - 9 dB more signal) and in this implementation occasionally locks up and requires the RPi to be rebooted. This also sometimes happens when the Receiver is stopped. 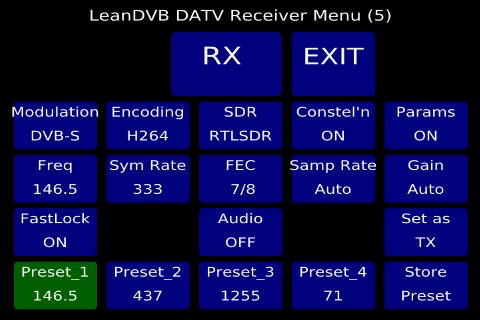 The receive menu is accessed by selecting the RX button on Menu 1. The function of the buttons, starting from bottom left, is as follows. There are 4 preset recall buttons. Selecting one of these buttons restores the settings that were stored for that preset. To store a preset, set up the settings that you want to store and the press the "Store Preset" button (which will turn Red). Then press the preset button that you want to use. The software will ask you to enter the Title for the button and then store the preset. FastLock on/off toggles the LeanDVB fastlock setting. Audio on/off does nothing at this time. "Set as TX" sets the receiver to the same settings as the transmitter. The Frequency button brings up the frequency selection menu. The presets on this menu are the same as those programmed for the transmitter. The symbol rate and FEC menus operates in a similar manner. The sample rate button brings up a keyboard where you can enter the desired RTL-SDR sampkle rate; the gain button allows entry of the RTL-SDR gain. Entering 0 for sample rate or gain, selects an automatic setting. Only DVB-S modulation is currently available. If you have purchased and entered an MPEG-2 decoder license (£2.40 from http://www.raspberrypi.com/mpeg-2-license-key/) you can select MPEG-2 decoding on the H264/MPEG-2 button. Only the RTL-SDR is currently supported. The constellation and Parameter buttons enable you to declutter the display. The RX buitton switches on the receiver. 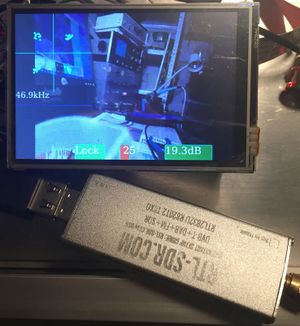 On a Raspberry Pi 3 using an RTL-SDR, it will receive H264 (and MPEG-2 if you have purchased a license key) anywhere between 24 – 1766 MHz and decode at up to 2000KS/s and display on the touchscreen LCD. The picture is jerky on the Waveshare touchscreen due to the low refresh rate, but is much smoother on the Official Raspberry Pi 7" touchscreen.

The software is not as good as MiniTioune at digging signals out of the noise, and sometimes takes a while to lock, but is well worth playing with as a stand-alone test receiver. The receive frequency needs to be set fairly accurately; if it is not, there may be positive lock indications, but no picture decode. The same frequency correction as is used for the RTL-FM audio receiver is applied to the RTL-SDR in this application. 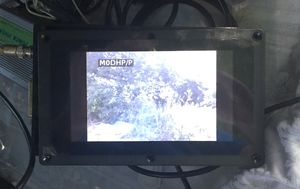 To order an MPEG-2 license key, you need to know the hardware serial of your RPi3. To find this, select Menu 3, "Check for Update" and then MPEG-2 License". The serial is displayed in the keyboard prompt. If you do not have the license, simply select enter and nothing will be changed. When you have received the license, return to this menu and enter the 0x...... section of the key. Press enter, and then go to Menu 2 and reboot. After reboot, you should be able to select the MPEG-2 decode option.

License keys are available from http://www.raspberrypi.com/mpeg-2-license-key/ The linux command to bring up the serial number is

Note that the Raspberry Pi 4 is incapable of hardware decoding MPEG-2.