The MacGuffin project is a collection of tools used to create an automated multi-band ATV system based on the Portsdown transmitter and the Ryde receiver. An RF path from the Portsdown or the Ryde to an antenna is created by using relays to select the appropriate intermediate equipment. This includes RX preamps, TX drivers and power amplifiers. Transverters may also be a part of the system.

The system automatically connects the components for the band selected by the Portsdown and sequences the transitions between RX and TX. An Arduino Nano and MCP23017 IO expanders are used to generate control signals. They operate the relays used to select the RF paths connecting the components for the various bands. PTT and DC power to the amplifiers is also controlled.

PCBs have been designed for the Nano and the MCP23017. The Nano board has circuitry to interface with the Portsdown and other equipment. The IO expander board is designed to easily connect to a 16 relay module from eBay or to user-selected relays through optional drivers or logic level signals. A builder could choose to use modules from eBay instead of the MacGuffin PCBs.

The first step in designing the system is to decide which bands will be used. That starts with the setup of the Portsdown. Next a relay configuration can be planned which will switch the RF through the appropriate equipment for each band. Then a basic Arduino sketch is modified to match the builder’s Portsdown configuration and the relay configuration. Modifying the Nano application does not require knowledge of the Arduino programming language. Tables in the sketch determine the control of the relay paths and the text displayed on the LCD.

This block diagram shows the basic structure of a MacGuffin system. 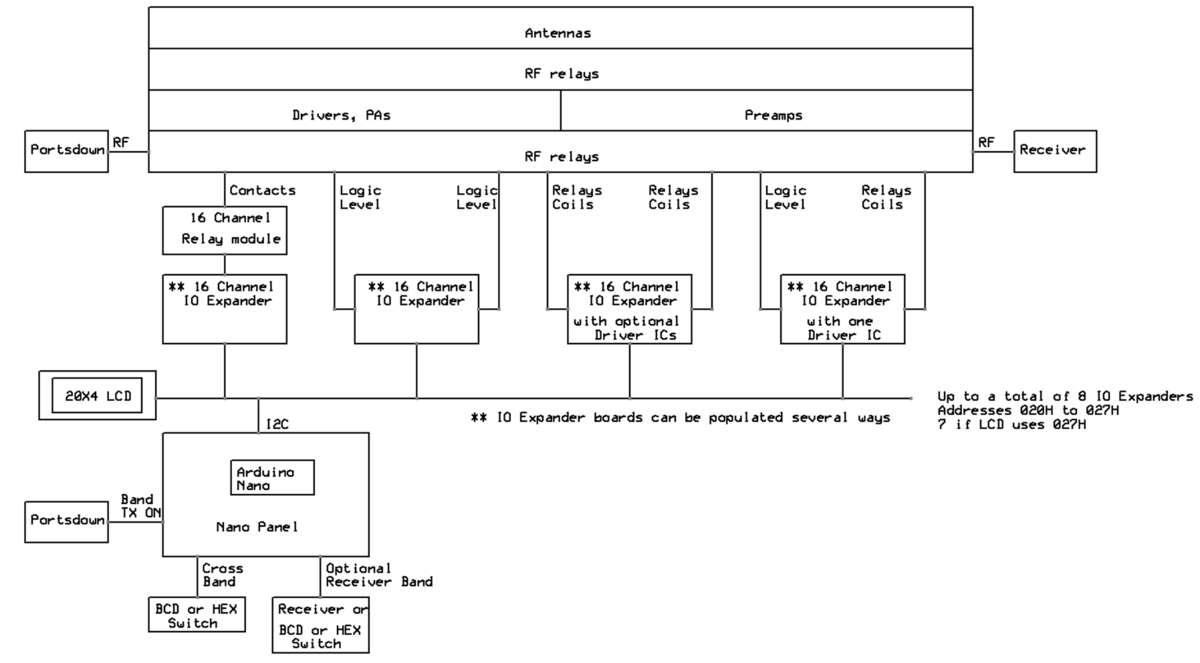 Files below are contained in these zip files.

Here are the things to build or buy.

MacGuffin_Sequencer_V3-0_19FEB2022.ino Arduino sketch to be modified for your system I2C_SCANNER.ino Utility for checking the I2C devices addresses to see they are present and correct.

Generate these files to plan your MacGuffin.