The Tilt-O-Matic (TOM) is an easy to construct pan and tilt mechanism designed by Gareth G4XAT for the ubiquitous yellow / orange surveyor’s tripods which are available for around £35 on the well-known auction site. 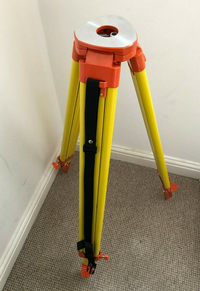 The ‘Tilt-O-Matic’ (TOM) provides smooth azimuth rotation with braking (optional) and a tilt mechanism capable of -10 to +10 degrees of tilt (exact limits selectable during the build) with a high degree of precision. Depending on your dish and end-use, the concept can be adapted to suit simply by changing the plywood (base-board) sizes, the height of the vertical separator and the length of the threaded tilt-adjustment rod. Materials have been chosen to be readily available, easy to work, and reasonably priced whiltst offering excellent performance in use.

The .stl files for the 3D printed parts will be available on the BATC wiki when they are released.

In the meantime, please email Gareth G4XAT, his details are correct on QRZ.com

PETG was used for the tilting printed parts, although PLA or PLA+ will also work with less resilience. Print time for the parts sets (print resolution varies depending on function of part/precision required) is around 10 hours and it uses 52m of 1.75mm filament, so about 1/6 of a 1kg roll.

The radio equipment is secured to a 2nd plywood plate. I use 8mm nuts, ‘penny’ washers and wingnuts to secure my various antenna/dishes. This top plate is attached by a hinge assembly to the bottom plate to enable the tilt action, controlled by the adjustment mechanism mounted at the end opposite the hinging.

A small brake assembly (optional) is attached to the underside of one tripod leg and this can be tightened to grip(brake) on the underside of the bottom plywood plate. You can easily add this after trialling the unit. Within reason, additional damping can be obtained by tightening up the bearing clamp turn-wheel, essentially increasing the pre-load on the bearing. 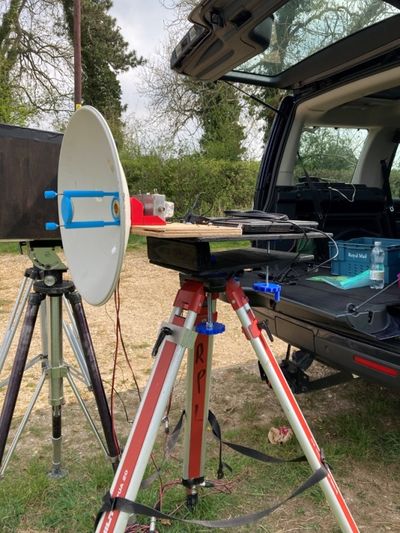 Have a watch before you build!! https://youtu.be/GmeCE8NWRHA

A 12mm hole should be drilled in the bottom plywood plate. As it will be the ‘centre of rotation’ you may choose where it is located, centrally or offset front/back depending on your expected headload balance point. I have two, one front mounted, one centrally.

Careful setting of the tripod leg orientation and angle can also affect ultimate stability. Press a 12mm nut into the holder and secure to the TOP face of your BOTTOM plate, centred over the 12mm hole previously drilled. (Hint, screw in the studding to centralise it around the plywood hole before you put the retaining screws in). 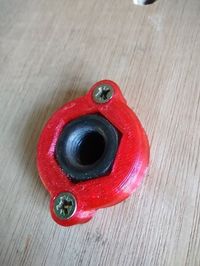 Press the main bearing outer into the large collar such that the taper angle will trap the bearing centre against the plywood when secured with the four securing screw holes .

The plastic ring should be a reasonable grip fit on the bearing outer as it is part of the rotation damping effect. If you want it looser, press out the bearing outer and relieve the inner face of the plastic collar with some abrasive paper. Don’t make it too loose or the bearing may fall out when you remove the table from your tripod (into the mud/sand usually…). 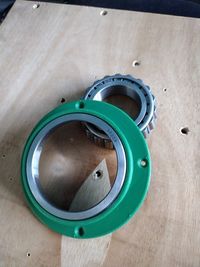 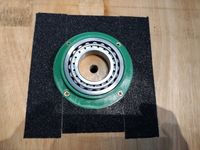 It may help the braking effect (if desired) to put some self-adhesive ‘grip/anti-slip tape’ around the outer of the bearing assembly.

The handwheel is assembled with the captive nut at the bottom, then a washer on top, then lock up tight with the nut above. The next two nuts are adjusted once the assembly is trial fitted to your tripod.

The assembly retaining stud (12mm) should then have the hand-wheel fitted with a washer and locking nut, then a pair of nuts (locked together once adjusted), a washer then the 6001RS bearing, followed by the plywood clamp with the bearing centre clearance hole toward the bearing.

This assembly is then screwed in from below, using the tripod bearing centring insert ring to help. The 12mm stud should just protrude above the top of the table captive nut.

Screw the assembly up into the move both nuts up until the bearing is tight against the plywood block, then remove and lock them against each other. There should be a washer between the top nut and the bottom of the bearing. 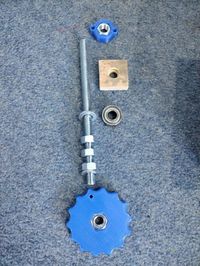 The plywood bearing block is drilled with a STEP-Drill so the bearing inner is clear of the plywood when clamped up underneath. It could also be relieved with a large countersink bit or Dremmel. The bearing is a 6001RS (28OD, 12ID and 8 width). Its purpose is to allow rotation of the plywood table without either tightening or loosening the clamping action.

Assemble to your tripod, locate the square plywood block with its sides parallel to the tripod clamp bar (that has/had the orange theodolite securing handle) and screw the hand-wheel up. You should be able to rotate the table with relative ease.

It should, however, be tight enough to prevent the bearing outer rotating on the tripod top face. Wiping the face clear of the supplied oil will help. 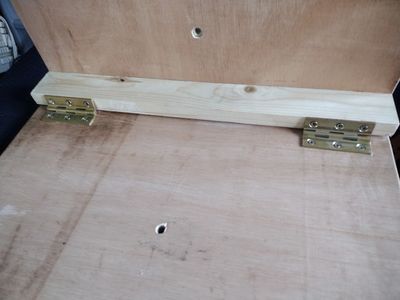 Hard to explain but the concept is visible in the example photos. 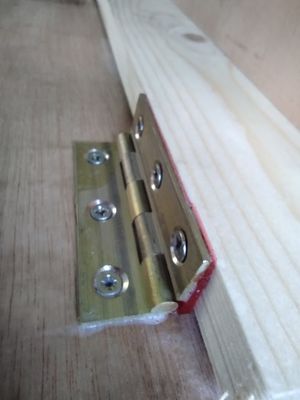 The hinges should be as close to the outer edges as possible (not so close that the wood splits) and can be usefully aligned by opening them out over the outer edge. Precision here will pay back later.

Carefully mark where you want the hinges fitted to the top plate (remember to allow for your chosen overhang) and initially fit just one screw per hinge, checking for smooth hinging action. I use full-thread chipboard screws and then grind off the protruding tips. This allows bigger screws to be used than the thickness of the ply allows. 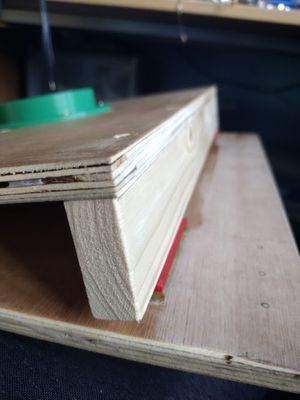 Cut the 3.2mm alloy rod into 4 20mm lengths to make 4 stub axels. Radius (file the sharp edges off) one end before cutting, it’s easier with a longer piece, but once cut, radius the other end too. This helps them slide into the plastic without galling. 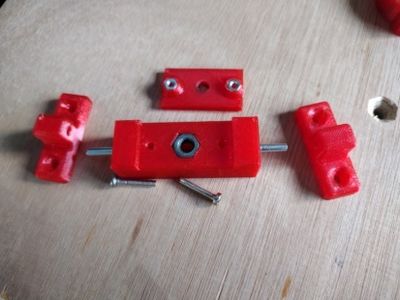 You may well need to drill the holes with a 3.3mm drill, this is due to either sag when printing or simply dimensional variations in the alloy rod. It was designed that way, better a tight squeaky fit than loose, it’s supposed to be precise after all. Press the stub axles into the nut blocks first.

The individual pivot block mounts can be added later. 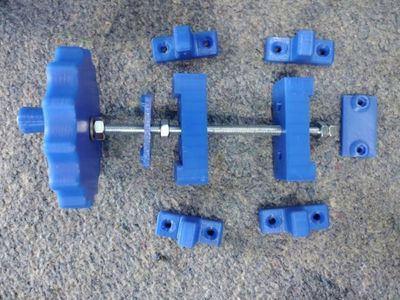 The hand-wheel is secured to the studding with a captive nut underneath, then a washer and clamping nut above.

This is the drive method to the 6mm studding so it needs doing up tight. Assemble the remaining parts as shown, clamping plate, captive nut, captive nut block, nut rotation block, two nuts then the top plate. Both retaining plates are secured with 3mm screws and captive nuts. The 6mm double nuts should be locked together, but be careful to adjust so that when the top plate is fitted, there is NO up-down movement of the threaded bar possible.

It should freely rotate, but not move up/down. This allows for slight differences in nut height (so much for standards) and can be used to eliminate any backlash or subsequent wear.

Fitting to the table

This assembly needs fitting at least 165mm out from the table centre hole, otherwise it will hit the tripod legs when you roate it. It can be further, think about your desired table geometry and top-load centre of gravity before your drill anything….. 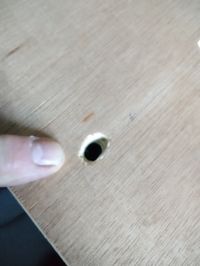 The hole needs to be oval to allow for tilting. It could also simply be larger, as long as it clears the threaded rod at all its incident angles. 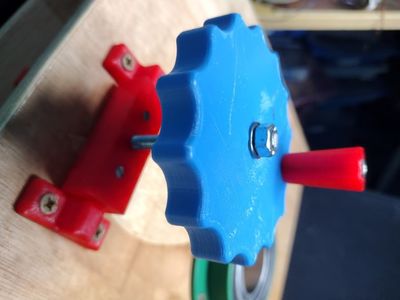 The Turnwheel handle is attached by a cap-head allen bolt, but you can use some 4mm studding with a pair of locked nuts forming the head. Unlike the Table retention handwheel, this time the captive nut should face the handle base as per the picture.

Screw in the bolt or stud assembly until the handwheel handle just remains free to turn. Put a washer and locknut on the opposite face of the wheel and tighten it up

This requires some adjustment for best function. Earlier versions allowed the brake pad to move left or right if the table was rotated but by having two mounting points this is reduced and by careful adjustment of backlash between them can be virtually eliminated. 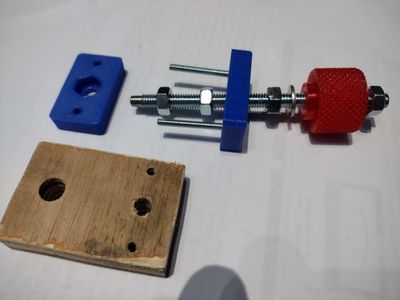 Firstly drill 3mm securing holes for the two blocks and a 6mm through hole for the brake studding. Use the block as a template.

Fit the knurled thumbwheel, washer and both nuts. Progressively tighten the washer side nut and draw in the outer nut into the depths of its captive recess. Do it up tight.

Fit the lower captive nut block and push the retaining screws into but NOT QUITE through the plywood block. Then fit the next nut and upper captive nut block. Rotate the upper captive block until it gets a snug fit on the plywood. Try to turn the knurled nut. If it's easy, tighten the block 60 degrees at a time until a slight turning resistance is felt. You are basically making the two nuts ‘work against each other’ to remove the slack in the nut/thread relationship. A small amount of thin oil will help smooth running.

When you are happy with the tension, remove the upper block and align it with the apprioriate heaxagonal nut face such that when the assembly is fully bolted up with the two 3mm screws,negligible sideways movement is present in the studding and a degree of ‘damping’ can be felt in turning the thumbhwheel. 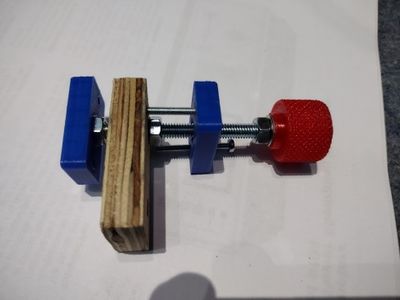 Fitting the brake assembly to the tripod

Remove one of the 8mm caphead bolts securing a tripod leg to the head unit. Replace with the brake assembly, making sure your screw in the 8mm bolt as far as possible to ensure adequate thread engagement, do not use excessive force or you may break the alloy casting. If the plywood plate is not yet held firmly, use the nut/washer to apply suitable clamping force. On mine it just acted as a spacer.

Screw the brake rod up so the tip is above the tripod top level. Put the round brake pad on the end of the studding. If you have some rubber inner-tube or felt, cork matting, etc. attach with a dab of contact adhesive or similar.

Fit the Tilt-O-Matic and secure with the central 12mm assembly. Adjust the brake pad upwards until its just clear of the friction surface.

It helps if you have sealed the plywood with some sort of lacquer, varnish or paint. I use Polyvine Acrylic lacquer (water based) for all my wood based projects. It also prevents water damage when it rains…. it's not that the plywood is particularly attractive, but why not. 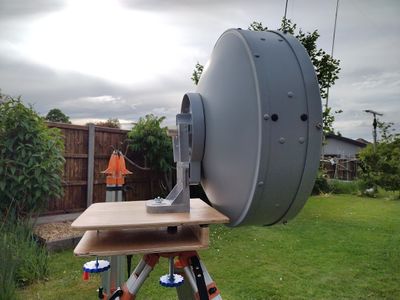