The BATC Video Source, based on a Raspberry Pi Zero or later models (but not the Raspberry Pi 4), was published in CQ-TV 270.

It was based on an earlier (now unsupported) version by G4EWJ described here: RPi Test Card.

The information below is provided to help advanced users to customise their VideoSource. Please refer to the original CQ-TV article for construction details.

All the files used to customise the display are in the folder /boot/testcard. This folder can be accessed directly on the card if you log in by SSH on a network-connected Raspberry Pi (not a Pi Zero on its own), or as the boot volume if you read the card on a Windows PC. The files are owned by root, so the use of sudo is required to edit them by ssh.

On start-up, if the previous banner text on the second and third slides include the text "BATC" or "IO90LU", the callsign.txt and locator.txt files are read and the banners are changed to "callsign at locator". This enables all the callsigns on the card to be initialised simply by setting the callsign.txt file correctly.

Also on start-up, the text in "callsign.txt" is convereted to an image and superimposed on the Test Card F used in the first slide. The same text is also stored for use as a camera caption.

The number in the filename determines the sequence that the card is displayed in; for example the card specified in tcdata10.txt will be displayed in the 10th button push after the first card.

Be careful to edit the file in a true text editor. Microsoft Word and Wordpad introduce special characters that will cause the file to not work. Use Notepad, or Notepad++.

Current consumption of a Raspberry Pi Zero running the test card is about 150 mA, which increaes to 190 mA if the camera is selected.

Assembly of Video Source projects are covered in this topic. 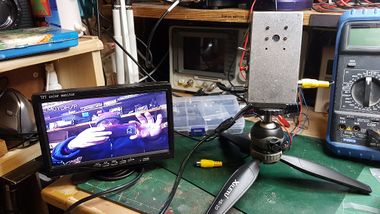 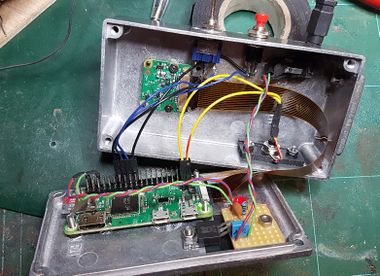 The video source shown fitted in a diecast box (M0YDH)
Retrieved from ‘https://wiki.batc.org.uk/index.php?title=BATC_Video_Source&oldid=7977’