The Portsdown band switching has been extended in the Portsdown 2018 software to allow 8 or 9 discrete bands. There are 2 types of bands, the direct bands and the transverter bands. By default, the direct bands are used, and the specific band is defined by the transmit frequency. Transverter bands can be selected from the "Band/Tvtr" menu on the main menu, and can also be stored and recalled in the presets. The settings used for each band (including the transverter bands) can be selected from the "Set Band Details" button on Menu 3.

Characteristics of Each Band

For each band, the following discrete parameters are stored:

Note that, even for the bands not designated as a "transverter band" an LO frequency can be entered and it will be used in the calculations. The final output frequency should be entered on the keyboard (in an effort to save mental gymnastics).

Relationship Between Presets and Bands

The 9 Bands are set up on Menu 3, “Set Band Details”. For each Band, the software stores:

When one of the 4 presets is stored (by selecting “Store Preset” and pressing a preset button), it stores the current:

The 8-band decode board provides a PIC-based replacement for the current 4-band output switch and the logic, together with 8 DIP switches, allowing the correct IF frequency (and hence LO filter) to be programmed for each transverter band. The design is shown here. 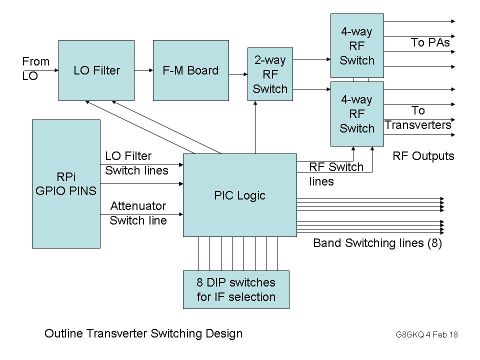 If fewer transverters and bands are required, simpler designs are obviously possible.

The same attenuator design that was recommended for the Signal Generator can be controlled to provide a different attenuation for each band. The attenuator should be inserted in the RF line between the Filter-Modulator board and the 2-way switch on the diagram above.