The Portsdown 4 transceiver software has been specifically designed to be used with the Raspberry Pi 4 and the official Raspberry Pi 7 inch touchscreen. It will drive a Pluto SDR or the LimeSDR.

With the addition of a MiniTiouner USB receiver [[1]], you will have a full spec DVB-S/S2 DATV transceiver.

With the addition of the Knucker USB tuner you will also have DVB-T receive capabilities.

Dave G8GKQ published this step by step guide to building a Portsdown 4 in CQ-TV 271:

When a MiniTiouner USB receiver is connected via USB:

When a BATC Knucker USB tuner is connected by USB:

When the Portsdown 4 is connected to the internet:

Received audio can be heard through either the Raspberry Pi AV socket or a compatible USB audio dongle. 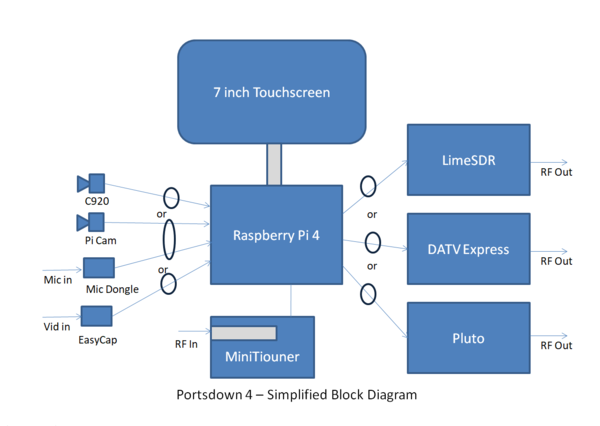 The Raspberry Pi 4 has increased power capabilities on its USB ports, so it is recommended that you connect the LimeSDR directly to the Raspberry Pi. For some reason, the LimeSDR Mini sometimes works better when connected to the USB2 ports (the black ones, not the blue ones).

Full details of the Portsdown hardware are available here.

The Portsdown 4 software is available on a pre-programmed SD card which you can buy from the BATC shop https://batc.org.uk/shop/portsdown-transmitter-pre-programmed-sd-card/

Note: the Langstone software needs a Pluto SDR to be connected by USB, and a compatible USB Audio dongle.

The Portsdown 4 support for the Pluto SDR is still under development and there are some limitations on functionality as described here Portsdown 4 Pluto.

For more information and to ask any questions see https://forum.batc.org.uk/viewtopic.php?f=103&t=6804